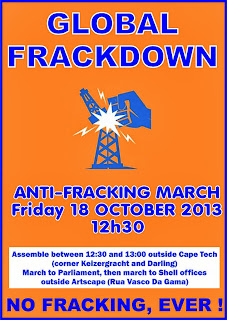 Fracking involves creating huge explosions many kilometers underground to get at difficult to access oil and natural gas. But it destroys aquifers, ground water and will destroy our beautiful Karoo, which will have thousands of oil rigs across its pristine landscape, plus thousands of trucks per well, pipelines, etc, across the Veld.

There are already cheaper and more environmentally friendly alternatives. The taxpayer and voter pays for these things. Government needs to listen to us. Please be at this demonstration and show that we live in a true democracy where government listens to the people.

In Germany, after Fukushima, 100,000 people marched against Nuclear Power in Germany. This caused the German government to change policy and they are closing all nuclear by 2023. All existing nuclear build has been stopped. In the meantime massive economic benefits have been created in Germany with their engineers and scientists forced to find better, more environmentally sound solutions, rather than mining and burning.

Let's get 100,000 South Africans to vote with their feet and vote against Fracking and huge centralised, expensive, and time consuming electricity, coal and oil build.
Posted by Repair Your World at 7:18 AM No comments:

Email ThisBlogThis!Share to TwitterShare to FacebookShare to Pinterest
Labels: Fracking

Please feel free to submit this to your local newspapers and communities.

Should we (South Africa) be investing in Nuclear and Shale Gas? Is Renewable Energy ok for base load? ie can it keep our industry running?
Difficult questions, hopefully this essay will go some way to answering them.

Government wants to implement 9.6 GW of Nuclear. Koeberg is rated at 1.8 GW, so that is another 10 reactors.

Government says that nuclear will cost R400 billion, but the latest reactor that went online in France shows that the price is likely to be closer to R1.4 trillion and that the build phase is a lot longer than anticipated. Imagine if you wanted to buy an airconditioner and the supplier said it would cost somewhere between R5,000 and R50,000 and would take somewhere between 4 weeks and 12 weeks to install. Would you be happy?

In order for Nuclear to be "viable" it has to cost R400 billion and run at full production 7 days a week except for refuelling which happens every 18 months and takes the reactor down for 3 to 6 weeks! About a quarter to a third of the fuel is refuelled each time. And then there is the issue of the "waste". So assuming no faults, the reactor is up for 92% of the time!

Plus in a "Base Load Power" station system, the optimal environment says there should be 15% spare capacity running at all times! This is just in case something breaks. So Base Load isn't really continuous. It just looks that way. There are a number of hidden costs.

Also regarding Nuclear, there is no insurance. So your homeowner insurance policy specifically excludes nuclear radiation. And only government can build Nuclear, as no bank will finance a Nuclear Power Station. Surely this should be telling us something about Nuclear Power?

Regarding Wind, we (South Africa) can install 28.8 GW (3 times 9.6 GW) at around R400 billion. And wind runs with a capacity factor of around 30%, ie it runs about 1/3rd of the time. So for the same price as the nuclear we have "24 hour wind." And one can tell if the wind will be blowing at 3pm tomorrow afternoon. It is difficult to know if our power stations will be running at 3pm tomorrow afternoon.

Also wind is "local" which means less strain on the grid and less chance of a catastrophic failure, eg if some of the grid goes down or if terrorists blow up South Africa's main switching station at De Aar, the Western Cape will be without electricity. Koeberg currently provides under 40% of Cape Town's power and most of it is already reserved for the big users. Eg when we had Load Shedding, Sacks Circle in Bellville still had electricity!

Another thing is that CSP (Concentrated Solar Power) with Storage is already cheaper than Nuclear and in Spain, the leader in this technology, and with the same sun hours as South Africa in their Southern Region, their CSP plants with Storage are running 16 hours a day, eg 6 am till 10pm, which would cover our peaks. Note that Namibia should be investing in these CSP with Storage Plants and should be suppling South Africa.

Also there is 7 GW potential pumped storage in Lesotho and South Africa should be helping Lesotho build these "batteries" which are needed in a Renewable Energy system. When we have excess power, we pump the water up the hill. When we need power, we let the water run down the hill making electricity. This is how our Steenbras Pumped Storage system works. Water is pumped up using off-peak electricity and then allowed to run down at peak time, or when there is a sudden demand on the grid and the "base load" isn't running fast enough to keep up.

If we get clever and implement PV (Photovoltaic Systems) with Demand Response and Time of Use Tariffs and Net Metering at the homeowner level we also reduce the strain on the grid and our costs will be dramatically less. A homeowner in the City of Cape Town currently spending R1,900 per month can install a PV system and spend R1,600 per month (assuming their roof is big enough). Finance and leasing schemes are already available in South Africa for these homeowners. And if they don't have enough roof space, communities can get together and build their own Community Solar Ground Mounted Systems. Note that remote off-grid "poor" people currently spend R4 per kWh to run their diesel generators. If they supplemented this with PV and other Smart Technologies, they would spend closer to R1.50 per kWh. But government thinks its better for these people to move to the cities and live in slums!

Our government thinks they will lose electricity revenue by allowing Small Scale Solar, but actually they would prefer to spend unknown amounts of Billions (Actually the budget is R2 trillion for South African electricity spend over the next 20 years) and wait unknown amounts of time for electricity. In the meantime our economy runs at 1% growth and we need 5% growth for at least 5 years for job creation. And we can grow at 10%, except we don't have enough electricity! The National Planning Commission Report says that 11 million more people must be employed by 2030. They won't have employment if we don't have electricity.

And Eskom and the Cities believe they will lose revenue if they allow Net Metering without a Service Fee, but the Californian Utility CPUC has done research that shows that the added cost is only 1/2 a South African cent per kWh. And every South African is already paying government a levy of 3.5 cents per kWh, more than covering the Net Metering "cost".

And Kusile and Medupi will be commissioned just in time towards the end of the 2010's, for other old power stations to be switched off (decommissioned). These power stations are already at end of life, but their lives have been extended at huge cost. We will commission 9.6 GW of Coal and then switch off about 10 GW of power stations in the early 2020's. So actually we won't be better off!!!! This according to the IRP (Integrated Resource Plan). Note that the risk table was in the IRP 2010 Draft 8 of 8th October 2010, table 37. It has unfortunately been removed from the current version!! The current version of the document is also in a dramatically different format to that of October 2010 making it very difficult for the public and government officials to see what changes the Department of Energy and their Consultants have made and to stay on top of things. Government also did this with the National Planning Commission report. The final document is in a different format and order to the draft!

Note that the IRP of 2010 gives Wind a 2 out of 12 risk rating and nuclear a 10 out of 12 risk rating. Nuclear is five times more risky than wind. This according to the Government's own research. Yet the government wants to implement Nuclear. I think one can see why they have left this information out of the final document!

Many people don't understand that Shale Gas requires Hydraulic Fracturing (massive explosions with millions of liters of water and 700 chemicals at great depths and pressures underground) which is known as Fracking! This first link is from the Oil companies showing what is possible. But this second video shows what is really happening any why many countries are keeping fracking out of their countries and natural, unspoilt, environments.

There is also methane in mines which should be extracted and burnt (Flared, or preferably turned into heat to run a power station) as methane is 20 times more damaging to the environment than Carbon Dioxide. I think around 10 years ago Goldfields wanted to build a 600 MW power station using their mine methane and the government said no! They could have run part of their mines with this power. And as you know, South Africa ran out of electricity in 2008. Goldfield's power station would have been useful. Note that in the late 1990's Eskom predicted that this load shedding would happen. But government took the money that should have been invested in the Smart Grid and spent it elsewhere. More short term thinking at the expense of long term growth.

Lastly, the Western World is changing to Sustainable Energy and their Engineering and Science growth is growing in leaps and bounds, whilst African scientific progress is being stunted! PV and Grid Tie Inverters use Electronics which are getting cheaper all the time. There is also computerisation in Smart Grids which is reducing costs. So why do we want to follow them and constantly be 25 years behind them? At the moment, we are allowing their Nuclear and Coal Developers to sell us out of date technology so that these Developers can stay in business and so that Africa can stay behind the curve - and poor.

This is truly a bad state of affairs. Until we decide that we've had enough and that we want to be on top of our game we will continue to languish with out of date equipment which is expensive, environmentally destructive and where the profits leave our country rather than staying in our country. It is possible to build Photovoltaic systems with Electricians and even with people who have 3 weeks of training (and writing an exam) in setting up these systems, yet the City of Cape Town says that an Electrical Engineer needs to be involved in designing these Systems! How stupid can you get? Unless of course you want to keep South Africa growing at 1% so that more than half the population get Grants and so that they continue voting for the government to keep their grants. The rest of the population are rapidly being employed by the government (44,000 in the past 3 months) and guess who they will vote for. The only way a Centrist, Communist based government can sustain the massive hand-outs required, whilst at the same time receiving less and less direct tax, is by mining. And the most obvious place for this mining for our government is in the Karoo, Shale Gas. This is called the Resource Curse. We should avoid it.