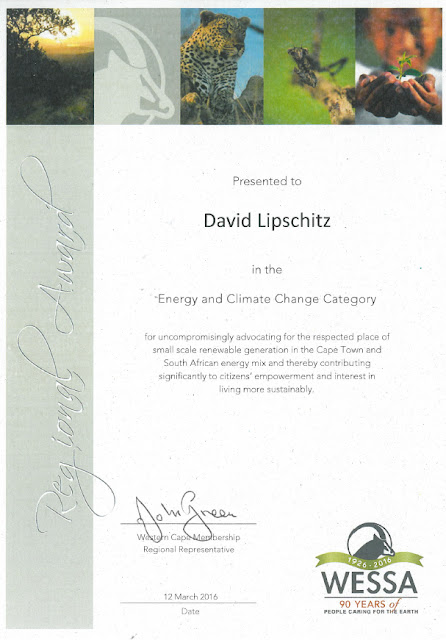 Certificate from WESSA, the Wildlife and Environment Society of South Africa

for uncompromisingly advocating for the respected place of
small scale renewable generation in the Cape Town and
South African energy mix and thereby contributing
significantly to citizens' empowerment and interest in
living more sustainably.
Posted by Repair Your World at 8:28 PM No comments:

Email ThisBlogThis!Share to TwitterShare to FacebookShare to Pinterest
Labels: certificates

Let people of SA be central in the decision over fracking. Letter by David Lipschitz in Cape Times on Friday 11th March 2016

According to your newspaper (March 10), the government will release their fracking findings today. Should fracking go ahead? Should we be concerned about the environment? Can there be compromise between environmentalists and frackers?

The problem in South Africa is much bigger than mining. We all know about the "resource curse."

Colonialists came here, initially for the bounty from our soil and then for our mineral wealth.

They took huge amounts of money and built their empires and their houses. Think castles, chateaux, mansions, manor houses, stately homes, with their hundreds of rooms, many servants, and huge grounds. And not only did their rich get rich, but many of their people got rich, too.

Nkandla fades into insignificance when compared with the grandeur of these massive houses and estates.

And through all this, the masses of South Africans remain destitute, dependent on the state. If the state decides to frack the Karoo and the coastal waters around Cape Town, then the state must give the profits to the people, so that the people become as rich as the state. We know that this is never going to happen.

We are in the 21st century, a century with more possibilities for the people than ever before if we choose to grab hold of the opportunities and the future, rather than corrupting our minds by staying in the past.

So, we can either spend the billions of dollars that would have been invested in fracking our gas resources to pollute our world and our minds for another 30 years - before we run out and then deal with a worse environmental disaster than the one we already have, probably with even bigger unemployment, more crime and more destitute people - or rather take the decision to immediately clean our act and install the alternative, clean energies, that we have now. 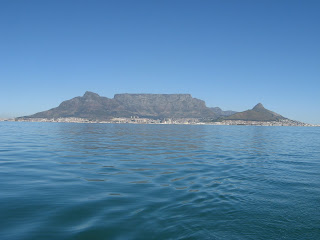 Life or Death Matter
According to the City of Cape Town web site, dam levels are at 38.7 percent, while last week they were at 40.5 percent. In 2014 they were at 81.2 percent. Theoretically Cape Town has 21 months of water left, assuming no rain, but with dams silting up, who knows how much water we really have?
See http://www.capetown.gov.za/en/water/pages/weeklydamlevels.aspx
Cape Town's dramatic population increase over the past 20 years, together with hardly any increase in dams, combined with the drought over the past two years, and lack of imagination in the City of Cape Town council and at provincial level, led to the problem.
Some people are calling for "Level 3" water savings. If the City implements Level 3 water savings, there will be an even more dramatic reduction in income for the City.
Many people have already installed pool covers and with a reduction in watering allowances on gardens, people are seeing a 50 percent-plus drop in water consumption, with an associated decrease in income going to the City, even with the massive price increases for large, home-based water users.
At Level 3, people might find ways to stop buying City water altogether! People and organisations are already finding ways not to buy electricity due to the massive price increases, together with less Eskom and municipality electricity being available. Cape Town's lack of water is a big problem, made much worse by decades of bad planning, and bad thinking! Desalination could solve our problem, but government isn't thinking about that - yet.
If people were allowed to install roof top solar electric systems on their houses, and if we were allowed to feed our excess electricity into the grid at a reasonable price, the excess electricity generated could be used to desalinate water. This is much cheaper than building new dams, and dams take years to build and need rain and mountain water - and we just don't have this time, nor, with climate change, can we expect the needed rain anytime soon.
If the City runs out of water, we'll all be dead within four days, so perhaps allowing rooftop electricity is truly the answer! Many people have planned their retirement, but isn't it better to plan to be alive next week?
Posted by Repair Your World at 10:35 PM No comments:

Quotes represent what Finance Minister Pravin Gordhan said in his Budget speech, although I may have paraphrased or shorted some of the text in these quotes.

“We are strong enough, resilient enough and creative enough to manage and overcome our economic challenges.” One wonders who Mr Gordhan meant by “we”. Government? He and the government want to do everything in this economy. But they are still dependent on taxation and so we need to find out how Mr Gordhan intends helping business, especially small business, where red tape is increasing every year and the ability of small business to continue in business is getting more and more difficult.

“There must be job opportunities, especially for the youth.” As we know only too well, job opportunities are not jobs, but short-term contracts, which are actually making the poor poorer and changing poor people into destitute people, dependent on the State!

“There must be fiscal consolidation, and the budget deficit must be reduced.” This implies that their must be a Budget deficit. Why doesn’t South Africa plan for a budget surplus by getting the economy moving?

“Regulatory challenges that affect mining investment and employment are being addressed.” Read relaxed! What happens to the environment? Will there still be clean air and clean water and clean land in a few years’ time?

“We must address institutional and regulatory barriers to business investment and growth.” Our government targets big business and itself. What about small business? What if rules are relaxed and the environment suffers?

“South Africa’s response to global climate change has been prepared.” South Africa aims to do this with increasing fossil fuel use taxes and by building nuclear power stations.

At the same time as this no real benefits are being given to private people who invest in making themselves more efficient and even in making their own electricity or collecting their own water. There are more and more incentives for business, but not for private people! And how can it be seen that nuclear power stations will prevent global warming, especially considering the huge pollution inherent in their build.

“The gas IPP program is being prioritised.” This essentially means importing gas and in fracking our Karoo.

“There is an R870 billion public infrastructure program over the next three years.” Judging by the waste and time overruns at Medupi and Kusile coal power plants, the South African taxpayer can expect at least half of this R870bn to be wasted!

How much better it would be if taxation was relaxed and incentives put in place for the private sector and homeowners to be able to invest in infrastructure projects before tax and before VAT, and with the ability to get the same benefits as big business.

“Taxation increases will include a new sugar tax on sugar-sweetened beverages, to come into effect on 1st April 2017.” Why not tax all items containing sugar, including bread, muesli and yoghurt? Research shows that many diseases are caused by an overload of sugar.

“Our policy commitment is to achieve universal health coverage.” But as we have seen this is to the detriment of the alternative health industry, where many products have already been removed from the shelves or made to be only available with a prescription, and where healers such as sangomas, shamans and witchdoctors are being declared illegal.

“Water.” Nothing has been said about support to prevent acid mine drainage and other sources of pollution of South Africa’s scarce water resources.

“There must be higher land use density.” But what of areas such as the PHA (Philippi Horticultural Area), a farming area and important source of water for the Cape aquifer, which is being mined as a new housing area? And why does every area need to be densified?

What of inner city areas such as District Six in Cape Town, where there is a huge opportunity to move displaced people back home and to increase densification right next to the CBD?

“We are resilient. We are committed. We are resourceful.” This has been said many times in this speech. I agree. But only if active citizens, which Mr Gordhan referred to in his 2012 speech and in this 2016 speech are included.

Thank you for reading this. Please engage with me for more out of the box thinking and to help you move your investments in the right direction, for you.
Posted by Repair Your World at 6:24 PM 2 comments: