What is Hydraulic Fracturing (Fracking) and Shale Gas. Is it good or bad?


I did a presentation at a Conference on Sunday 24th August 2014.

I have loaded the presentation on SlideShare at http://www.slideshare.net/DavidLipschitz/hydraulic-fracturing-fracking-a-modern-and-biblical-view

Is Fracking good or bad? What do the pro and against people say? How can we get a balanced view? Does age old Biblical Wisdom apply? Does South Africa need to Frack? Are there other options?

This presentation refers to 7 videos and two other peoples' presentations in an attempt to get a balanced view of this energy industry.

A question to consider: if we pollute the planet, do we pollute our minds?
Posted by Repair Your World at 10:10 AM No comments: 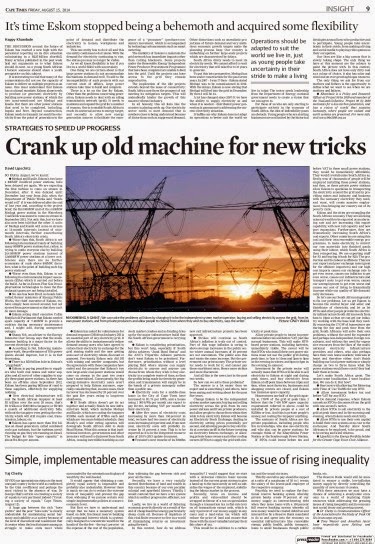 My first ever Comment on the Insight page of a newspaper.

We are all very excited here in Milnerton. Thank you to everyone for your support and to the Cape Times for publishing my letters over the past 6 years since I started writing about electricity. I feel like I just got my degree in journalism after more than 6,000 hours invested and very many conferences, reports, newspaper articles, magazine articles, discussions, forums, debates, presentations to parliament, meetings with political leaders, my friends at the Milnerton Proper Residents Association and the Greater Cape Town Civic Alliance, etc.

I'd especially like to thank my Facebook community friends for your ongoing support on this particular forum. Being an Active Citizen is often very lonely, but you guys and girls always show up with your "likes" and the many comments, critical sometimes, but always appreciated, and your ongoing support.

Thank you to everyone. You are always in my prayers.

Click on the picture above to read the article.

Posted by Repair Your World at 7:32 AM No comments:

South Africans are being held to ransom by our government, Department of Energy, Eskom officials, and their consultants, advisors, contractors, staff, and foreign suppliers. They are impeding growth and contributing to South Africa's debt crisis, unemployment, exchange rate crisis, inflation, and the possibility that South Africa might be downgraded to Junk Bond Status. Foreign Investors cannot invest in "Junk Bonds" and will sell their South African debt (bonds) and possibly investments, potentially causing a massive crash in our stock market and possibly worse strikes and hardship. But the situation doesn't need to be like this. We can change it.

The situation must change.

South African citizens must take responsibility for themselves and not rely on government to help anymore regarding electricity provision, although government obviously still has a role to play.
Posted by Repair Your World at 6:24 PM 1 comment: