I believe that groups of people should create Power Stations.

If you look at Old Mutual's on site power station, you will see that a lot of work has been done, but this is a tiny amount of what Old Mutual could actually be doing. If only I knew a director there who I could talk to about my vision.

I believe that the first thing that must happen in South Africa is that the Playing Fields must be levelled. So everyone should get the perks that the Energy Intensive User Group (EIUG) get, and that Big Business gets. eg Time of Use Tariffs; Net Metering; Demand Response; Buying equipment before tax and before VAT; sitting with Eskom doing demand planning on a daily basis; Energy Efficiency perks; Rebates; etc. And all Without a service fee.

If we do only these two things, and we follow the ideas as set out in the Energy White Paper of 1998 and the Renewable Energy White Paper of 2003, and their National Planning Commission document, that I commented on, then we will solve our electricity problems very quickly. And once we start solving our electricity problems, we will solve our water, food, transport, jobs, health, and other problems.

Note that a Government White Paper is a Government Strategy Document. If only our government had followed its own strategy.


It's in our hands. It's not the government's fault. It's not "another" or "the other's fault". It's my fault. It's your fault. Because we sit and complain and we don't do something about it.

I have a saying: "The rich are rich because they socialise. The poor socialists are poor because they (we) don't socialise." Microsoft, Facebook, and other companies are still there because the founders stayed together. If they fought, they worked out their problems.

Let's work together in our power station groups to solve our problems, taking responsibility for ourselves.

And let's dramatically cut our cost of living. Today.

But there is a problem in a capitalist society, and that is "enclosure", as explained in The Voluntary City. Remind me to tell you the story about the Pharaoh.

My friends: the price of water, electricity, and food is coming DOWN! But the fossilised fuel dinosaurs like Eskom are in their death throes, and as monopolies, they mess up a lot of stuff as they die. Yes, Eskom owe's R420 billion. But in the greater scheme of things, that R420 billion is a tiny amount of money compared with alternatives that actually save us money.

Note that I don't think that Eskom really needs to die. I believe that South Africa's electricity supply should be closer to 200 GW than to 20 GW. Huh, you might say "I thought that electricity demand was decreasing." Well that is only because South Africa's biggest export is jobs, followed closely by coal, iron ore, and so many other raw materials that are exported to the world, and then imported by us, making our finished goods costs amongst the highest in the world.

And the only way that Eskom can supply this 200 GW is to allow the public to help it.

I choose to acknowledge that a lot of people will become "redundant" as we move to the new system. But Eskom and our government are fixated on the number of people who can be employed by Eskom, or SAA, or Government, without realising that the approximately 200,000 people (two hundred thousand) who supply electricity and coal and building power stations, are doing it so that at least 55,000,000 (55 million) people have electricity and jobs and welfare and health and food.

Winston Churchill made a decision in 1911 to move the British Fleet from coal to oil. It was a dramatically difficult decision, because so many stevedores were involved in shifting coal around ships, whereas one person could turn on a valve and oil would flow. You can read more about that here. Search for "from coal to oil" (and then click down-arrow to get to the article) to learn how difficult decisions are made.


Government's job (according to the Renewable Energy White Paper of 2003) is to create an enabling environment for its citizens. Let us hold our government to their task. And let's do it now.

PS: The cliff on the right hand side of the attached picture shows our current electricity trajectory, even with new coal, and new water and potential new uranium. It doesn't have to be like this. But it's up to us. It's up to us. Today.

May we all be blessed in our coming and going.

Maybe we don't feel this all the time. But some of the time we are these things. And if we say these things as affirmations, we change ourselves and the world and each day, each of these things becomes 1 second more, so that eventually it is all day.

There is so much more one can write and say. You can read it all on my blogs and other places on the web.

A reminder that we need two things:
Level playing fields;
Lots of My Power Stations. 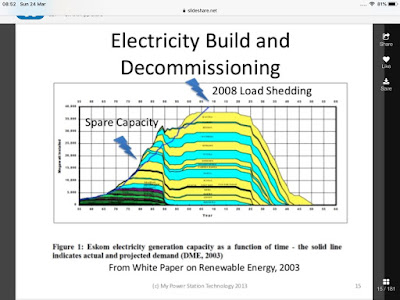 Posted by Repair Your World at 7:49 AM No comments:

Posted by Repair Your World at 6:49 PM No comments:

Email ThisBlogThis!Share to TwitterShare to FacebookShare to Pinterest
Labels: electricity

Dear Editor
I first wrote about Medupi on my ​Blog in August 2010. I suggested that the Medupi build be scrapped and the money​ be​ used more construct​ive​ly. Imagine if the R500 billion wasted by Eskom over the past 10 years had been spent on Renewable Energy. And Eskom is ​at least R100 billion ​behind on its Grid Maintenance​. And Eskom hasn't met South Africa's emissions standards, and if Medupi is ever completed, it also won't meet its EIA requirements​, and according to South African law, it should not have been allowed to start up!​ What is the point of Environmental Impact Assessments if even the government is allowed to ignore it?
The​n​ on August 9th, 2015, I wrote the following on my BLOG​, which was a copy of something I put on Facebook on August 9th, 2014​; and I want to know why has this been allowed to get exponentially worse?
Medupi coal power station should be online by now
Just a reminder: Eskom's first 800 MW Medupi Power Station turbine (unit) was meant to go on stream in September 2012. And then we were expecting the other units to come on stream at 9 month intervals, so we should have at least 2,400 MW on stream by now, but we have nothing, and the latest news, from our new Minister of Public Works, Lynne Brown, is that the first 800 MW unit will be on stream in December 2014 and then the units will come on stream at 12 month intervals.
South Africans are being held to ransom by our government, Department of Energy, Eskom officials, and their consultants, advisors, contractors, staff, and foreign suppliers. They are impeding growth and contributing to South Africa's debt crisis, unemployment, exchange rate crisis, inflation, and the possibility that South Africa might be downgraded to Junk Bond Status. Foreign Investors cannot invest in "Junk Bonds" and will sell their South African debt (bonds) and possibly investments, potentially causing a massive crash in our stock market and possibly worse strikes and hardship. But the situation doesn't need to be like this. We can change it.
The situation must change.​ (Added March 2019: Maybe South Africans, especially the jobless or soon to be jobless will wake up in May, and change South Africa!​)
South African citizens must take responsibility for themselves and not rely on government to help anymore regarding electricity provision, although government obviously still has a role to play.
Yours faithfully
David Lipschitz
Ph 074 119 3246
Posted by Repair Your World at 5:19 PM No comments: