Load Shedding 5 to 10 tonight, and probably every night until 2021.

There is also a "Maintenance Festival" this weekend. No-one knows how long we'll be off for, but I'd prepare for long periods without electricity, or 2 or 3 periods of 2.5 hours per day being switched off, ie stage 3b / 4 load shedding or worse.
Posted by Repair Your World at 3:56 PM No comments:

The latest news is that Medupi Coal Power Station will only be completed in 2021 instead of 2019, which is already instead of 2018, 2017, and 2016. This means that the time from now till completion is almost as long as the entire build process was meant to take in the first place.

And this means that we can expect Load Shedding to continue at least until 2021. But worse than this, is that at the beginning of the 2020's, 10 GW of existing Eskom capacity reaches end of life, which means that just as Medupi and Kusile are completed, 10 GW of existing capacity will be switched off, and so 10 GW - 10 GW equals zero GW, so load shedding will continue for at least another decade.

"We are continuously told by government that there's no money, but if we think differently we will suddenly find we have ample money.

"One way to find the money is to use the R100 billion for the Medupi power station in a different way. Stop the Medupi new power station development, pay the fines, and use the remaining R70 billion (my guess) for R30 billion of Solar Water Heaters (20GW of energy instead of 5GW of energy), R7 Billion for the teachers, and "change" for: feed in tariffs; zero VAT on renewable energy products; 30% rebates on all solar water and renewable energy installations; tax credits; R10 billion for training and skills transfer from Germany, Spain, USA, Australia, etc."

Imagine how many poor peoples' houses could be power stations by now.

Imagine how many rich peoples houses could be power stations by now.

Imagine how many strikes would have been avoided.


Imagine how many more people would have been employed.

Imagine how strong South Africa's exchange rate would be.

Imagine how low our Inflation Rate would be.
Posted by Repair Your World at 8:17 PM No comments:

David Lipschitz Representing SAAEA at the CSP Conference in 2015 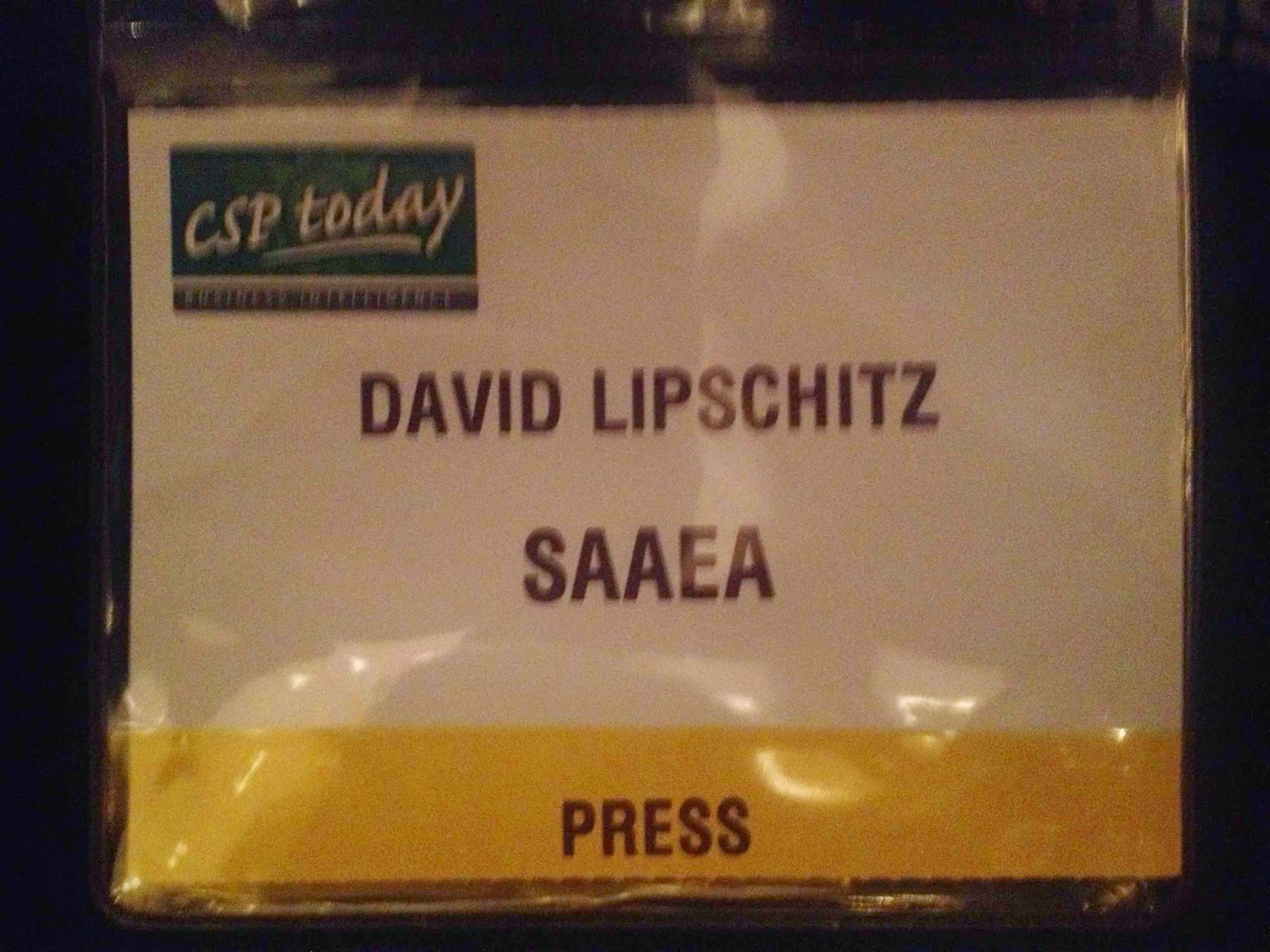 Yours truly at the CSP (Concentrated Solar Power) Conference at the Southern Sun Cape Sun Hotel today. I represented the SAAEA, South African Alternative Energy Association where I am an honourary life member and adviser.

This card also says “Press” on it which confirms my status as a journalist. Besides my being a member of the Cape Town Press Club since last year.

I spoke to the organiser when leaving the conference tonight and he said I asked good questions.

And today, the Cape Times has a letter from me on behalf of another organisation, the GCTCA (Greater Cape Town Civic Alliance) where I hold the Energy Portfolio Leadership. The letter is about Carbon Taxes.
Posted by Repair Your World at 6:56 PM No comments:

A friend installed a solar PV system for R100,000, which uses partly solar photovoltaic electricity from the sun, partly batteries, and partly Eskom.

Here are some calculations:

R100,000 is R1,338 per month at 10% over 10 years. Or R16,056 per annum. Using the Standard Bank calculator at https://www.homeloans.standardbank.co.za/servlet/com.sbsa.sbhl.bondcalc.business.MainCalcServletInternet?page=Main_MonthlyRepayEntry

Note that the R2.10 per kWh tariff that I have used in the following calculations is the City of Cape Town Electricity tariff assuming a 13% increase in July 2015.

He also switched to gas for part of his cooking, but he still has R7,771 to play with before he breaks even. And that is only in the first year. In the second year when prices increase by 13% again, his savings will be even greater as his cost will be R22,569 instead of R33,327.
Posted by Repair Your World at 9:44 PM 1 comment:

"Realising that sustainable GDP growth is paramount and that taxation revenues can far exceed electricity revenues, President Jacob Zuma endorses Eskom and the Department of Energy's proposal to allow Embedded Generation using Net Metering and Time of Use Tariffs for Homeowners, without a service fee and with the same buy and sell electricity prices. Furthermore, homeowners will be treated like business owners and will be able to buy their systems before VAT and before Tax, thus levelling the playing fields with IPP's (Independent Power Producers).

"Homeowners who commit to not using the grid at peak times, ie between 7 and 10am and 6 and 8pm, will furthermore receive a 30% tax rebate on their installation costs for the battery components of the system.

"In order to ensure that the poor do not lose out, Eskom commits to not building 'Coal 3' and to use this R125 billion to give the same resources to 2.5 million households."

Yes, its April Fools, but wouldn't this headline be amazing if it were true!
Posted by Repair Your World at 8:52 AM No comments: